Like any relationship there are going to be ups and downs. Microsoft and Google, giants of the computing world, are no different.

Microsoft launched Office 365 in June 2011, which also happens to be the exact month Google released their Chrome OS. Acer and Samsung were the first manufacturers to produce laptops with Chrome OS installed, and thus the first Chromebook came into being.

Both Google and Microsoft have heavily developed their offerings since then, and so the Office 365 and Chrome OS you see today are totally different – as you will see below…

Why buy a Chromebook?

The initial concept of Chrome OS was simple – a lightweight operating system for browsing the web and performing web based tasks. Lower hardware requirements meant they were cheaper than Windows or Apple laptops – something that remains true today.

The educational sector lapped these devices up, and this continues to be where the Chromebook is most successful. Being cheap and easy to maintain, along with the speed and simplicity of the user interface, Chromebooks represented 58% of the 2.6 million mobile devices purchased by US schools in 2016.

The COVID-19 pandemic only propelled this further, again the low cost appealing to many schools and households for remote learning. 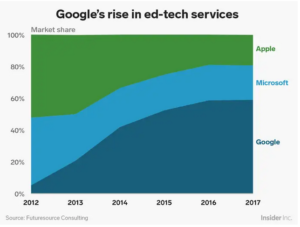 Microsoft appears in the picture

From 2017, Chromebooks have also been able to run Android apps, vastly enhancing the capabilities of these devices. With Microsoft having versions of their O365 applications on the Google Play Store, users have been able to run Word, Excel and Outlook (to name a few) on their Chromebooks, providing a more unified experience.

This move to allow Android apps widened the appeal of the Chromebook to new markets, and businesses started to purchase them as well.

Why not to buy a Chromebook?

Whilst Chromebooks work well in some scenarios, there are limits to their abilities:

That last point about functionality is exactly why Microsoft have decided to stop supporting their apps on Chromebooks.

“In an effort to provide the most optimised experience for Chromebook customers, Microsoft apps will be transitioned to web experiences from 18th September 2021”

This means that they can offer more functionality that they can via the apps, and also tends to be better optimised for larger screens.

What does it mean for me?

Users who have already got the apps on their Chromebooks will still be able to use them, however they won’t be supported or feature any updates. Instead, a warning bar will show pointing users back to their web browser.

Realistically, if you want to keep using a Chromebook, you will be limited to using Microsoft Office 365 entirely online. This means you will have limited app functionality, but you must have excellent internet connectivity all the time. 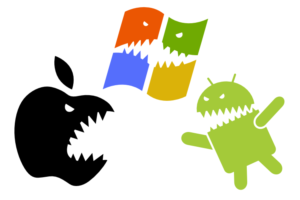 Throughout the years, the relationship between the 3 giants of personal computing (Apple, Microsoft and Google) have always oscillated between outright refusal to have compatible products and reluctant cooperation even when there was mutual benefit.

The result is that even at the best of times, compatibility between products from each company has been limited, and in a business environment Microsoft Office on iOS & Android have always caused issues. Even if on paper they are meant to work, when you had a problem you end up being bounced around between Microsoft/Apple/Google.

What should I do?

At VMit, we have never been down the partisan road of saying one system is better than another. They all have a specific purpose and market segment. To testify this, whilst as a business we only use Windows desktops & laptops with Android phones, a quick show of hands for our personal devices reveals:

However, we believe that if your need is to reliably run a business at a reasonable price, Microsoft Office 365 is the standard to work with and we would recommend sticking to Windows 10 (or even go to Windows 11 😉) to ensure seamless compatibility.

Like any relationship there are going to be ups and downs. Microsoft and Google, giants of the computing world, are no different. Background Microsoft launched Office 365 in June 2011,…